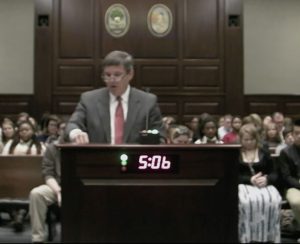 J.R. Murphy and Wesley Sawyer represented Progressive Direct Insurance Company in one of the first cases in the country to reach an appellate court on the application of the Uniform Electronic Transactions Act to a written offer requirement in the insurance context.

Appellant Loretta Traynum applied for automobile insurance online. During the application process, Progressive offered optional underinsured motorist coverage electronically through its website, which Traynum rejected. The Circuit Court agreed with Progressive that the conclusive presumption of a meaningful offer applied because Progressive complied with the requirements of the South Carolina Uniform Electronic Transactions Act in making its offer.

While the appeal was pending before the Court of Appeals, the Supreme Court certified the matter under a process that is normally reserved for cases involving an issue of significant public interest or a legal principle of major importance.

In April of 2016, the SC Supreme Court affirmed the trial court’s award of summary judgment to the respondent. (Traynum v. Scavens and Progressive Direct Insurance Company, Appellate Case No. 2015-001734.)